I continue to be amazed at how fast Marlow has won my Dad over! He is so gentle with him and for the first time did not try to jump up on him when he came in. It is almost as if he senses that he needs to protect him. Marlow can be pretty insistent when it comes to wanting attention, and Dad is now rubbing behind his ears and talking to him. He has said that Marlow is very smart and that is why he likes him...lol. I think Lynne said it best.....Marlow has gone from being tied with a chain to a tree to taking care of my Dad. He goes to his bedroom first thing in the morning to check on him, also. Marlow has found a new job! 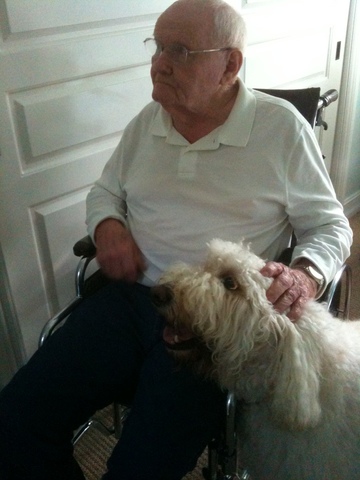 You can see "LOVE" in his eyes looking at your dad... So sweet!

What a great doodle he is!! it is almost unbelievable that already two years ago he was chained...

Look at him today! He is gorgeous, proud grandson and will protect and take care of his granddaddy for a very long time!

Remember Susan you told me the same thing Lynne told you and few months after Thalie came in our life. Talking about bath... it took us at least 4 bath before the ugly puppy mill smell got away. Poor baby even Gamine didn't want to be too close. Now she smell like a rose!!LOL

Lynne is right...I waited and searched and we were willing to drive to CA from AZ

to get a doodle! I had a couple that didn't go through and Lynne kept telling me

"when it is meant to be, you will find him!". I was searching thru the old DRC before

was in Los Angeles, CA according to the posting. I called and the lady said he was

actually in Phoenix, AZ and they were listing for a friend. When they put us n contact

with the person who listed him, it turned out to be the neighbor of the family who had

purchased Marlow at the Mall Pet Store for their grandkids.....and then he got big!

They kept him chained to a tree outside In Phoenix! At night he was crated in the

garage. They were afraid he would knock the old man at the house down. He was

leash, he was bouncing like Tigger...lol. The owner was not at home and the neighbor

bag of CostCo dog food and Marlow (who was named Mateo a the time) free of charge.

When Marlow came home with us, Lola the old girl immediately liked him and when I gave him a bath

I saw his true color....creamy white! Here is the first picture I ever saw of him. He has been with us for almost two years now. 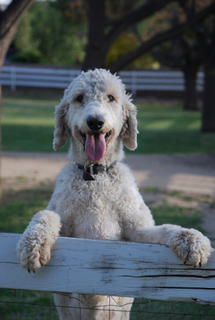 Susan will have to tell you that one. All I know is she was looking and waiting and I kept telling her that when the time is right she'd know it. Then there was Marlow.

What a great story.  I really love these stories because over and over again dogs show us how wonderful, gentle, and smart they really are.﻿﻿   Yet, so many people still do not give dogs enough credit and continue to treat them poorly, like second class citizens.  So sad.

Admin Comment by LM Fowler - Admin on December 13, 2010 at 12:45pm
Thank you so much for sharing this with us, Susan. It's important for Marlow to have a job. All creatures need to feel useful or else what is life for? Your dAd probably needed him too.