Regarding Accusation, Innuendo and Outright Lies

Here is the truth. We are an all volunteer group of caring people who have the sole goal of helping doodles in need. We do not make money off this endeavor, in fact the opposite is true. We have given guidance to help people adopt dogs from shelters and other rescue groups. We have worked to gather and disseminate information we hear about bad shelters, abusers of animals and notorious puppy mills. We have never made a profit and do not ever plan to.

We do not buy dogs, nor do we sell them. We do pay adoption fees, which are required from some shelters who will not work with rescue groups. These shelters refuse to release their dogs to anyone, unless they get their money. Not an adopter or a rescue group are allowed to take dogs without paying this set fee. We have never paid less than what an adopter would be charged at certain shelters. However, when we have found a home for that dog, our adoption fee has always been less than what we were forced to pay.

When you add in the vetting costs we pay to get that dog to our vet, any profit is always lost. Our goal, as said, has never been to make money. Which is the opposite of some shelters.

On the other side of the coin...there are shelters who have and continue to work with rescue groups. They call us or other rescue groups, because their sole priority, as is ours, is the well being of the dog. We have several shelters who never charge us to bring their dogs into our rescue or others. Some shelters just ask rescues to cover their vetting costs, because their goal is to get that dog into a home. Again, as is our goal, too.

So to the someone out there who is saying otherwise, you lie. To our supporters, Thank You for helping us save the lives of dogs. To those who hear the lies, I hope this explains what we are all about. To our volunteers and others who have the sole goal of helping save dogs, you are the best people in the world and what you put out into the universe everyday, is being tallied and remembered. And the lives of the dogs we have saved...speaks for itself.

I wrote this blog, originally, in July, 2009 due to accusations of one rescue against another. Since that time, I have come to learn this is a common practice between rescues who do not like each other or feel slighted by someone in the animal rescue arena. I have been a target of some of these people as part of the rescue I helped to start in 2009 and then by that rescue toward me when I resigned and started my own rescue. It is sad that all rescues and rescuers cannot or will not work together to change the awful condition of so many animals in this country, who can care less who likes each other or who saves them.

I will not make apologies to my ex-partner, whose agenda does not match mine. Nor will I worry about the negativity and back stabbing that exists. Those are their problems, not mine. The "Old Friend" who now has a Civil Suit against me to return a dog after making a verbal agreement with me and because she believed lies, is also not important. What is important is that dogs are saved and safe. Why should it matter who does this? Why should one rescue care who saves the dog? Why would anyone listen to anyone who bad-mouths and puts down?

You can fight amongst yourselves. I don't care what you say about me, I sleep very well at night and KNOW that my karma is safe. Can you say the same about yours?

Comment by Susan D. on August 9, 2009 at 6:46pm
Although I am late to read this, here is another sucess story! Without the help of everyone here, I would not have found Marlow! I sing the praises everywhere I go about this site and know for a fact what good work is done here! 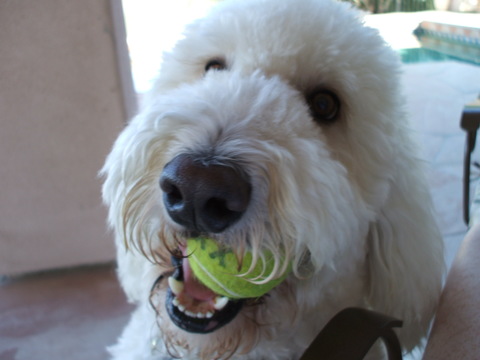 Admin Comment by LM Fowler - Admin on July 15, 2009 at 6:27pm
Thank You, Deb. Sometimes I am so humbled by the kindness of strangers...now a real friend. You keep that beautiful girl happy and everything else is worth it.

Member Since 2009 Comment by Debbie on July 15, 2009 at 6:19pm
Very recently, I had the great displeasure of coming face to face with the result of someone's horrendous lies. It put not only a helpless, abused animal in harm's way, but it also put an innocent family in the direct line of fire from a highly disgruntled, angry, believer of these lies. To the individual who created this situation, I ask that you rethink your position here and consider the impact your words might have on an innocent bystander. I do not know you and you do not know me, but I am the person who had to deal with the repercussion of your conversation. I have seen nothing in my involvement with this group that substantiates their statements. In fact, Lynne contacted me on another forum and has been wonderful in assisting me in helping to rescue a doodle and standing by me every step of the way in doing so. She has absolutely not made one dime of profit off my recent adoption. I am proud to be a member of this group and have been so touched and overwhelmed by the kindness, support and knowledge they have provided me. I ask that you take some time to think about the things you are saying,,,and to think about the dogs and humans that might be hurt as a result of your words.

Admin Comment by LM Fowler - Admin on July 12, 2009 at 11:22pm
I think we need to take up a collection to buy Thalie a bigger bed! LOL She gets prettier with each passing day.

Admin Comment by LM Fowler - Admin on July 12, 2009 at 11:01pm
He is becoming absolutely gorgeous. I cannot believe this is the same shy, scared puppy I met three weeks ago at the shelter.

Thank you for your support, Adie and everyone.

Admin Comment by LM Fowler - Admin on July 12, 2009 at 9:58pm
Thank you Jodi. I am not looking for accolades (although successes are why we do this). I just felt a little sideswiped by someone with an ax to grind using us to do so. We are so happy about your finding Marco and all the other's we have been able to help and that's why we do this. Plain and simple. If anyone thinks anyone in rescue is doing it for the money, they would be very wrong. Thank You, Jodi for your kind words.

Member Since 2009 Comment by Jodie Hart on July 12, 2009 at 9:48pm
I'm uneducated about what brought about your post Lynne but I just want to share with everyone that without all of you wonderful, kind people I would have never found my Marco. I searched for weeks for the perfect rescue doodle and everytime I found one, he/she had already been adopted only because of the diligence of Lynn and all of the DRRC volunteers.

There is nothing but love in all of your hearts and a very strong desire to place these abused, neglected babies in the perfect home. I know that from first hand experience as you guided me to my rescue baby. And his adoption fee could'nt have even come close to paying for his vet fees.

God bless you all and PLEASE keep up your mission!