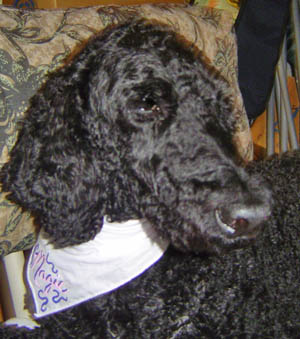 Magic was a beautiful Standard Poodle who was with us for only seven years. She was sweet and gentle and only wanted to be with us. She liked to cuddle and play with toys she had for years. Not one of her toys was ever chewed apart or destroyed. They were in her toy box and would get pulled out occaisionally and we would find them here or there, as she played with them.

Magic was raised with my twin boys and she thought she was the triplet from the time she came home with us. She was very loyal to the boys and often was found in the same room with them, whatever they were doing.

Magic died from Kidney Failure from tainted dog food in 2006 and I think about her everyday. I know she is waiting at the Rainbow Bridge for me because I can still feel her presence in my life.

Permalink Reply by Maya on February 8, 2009 at 10:17am
So sad. You have a way with words that makes it even sadder! Breaks my heart!

AdminPermalink Reply by LM Fowler - Admin on February 8, 2009 at 11:27am
Thanks! She was very special and it broke my heart when she went. But I KNOW I will see her again someday. She had a hand (or paw) in sending Ginger to me 2 weeks after she passed. Ginger has many of Magic's qualities and I see "Magie" in "Gingie's" eyes all the time. 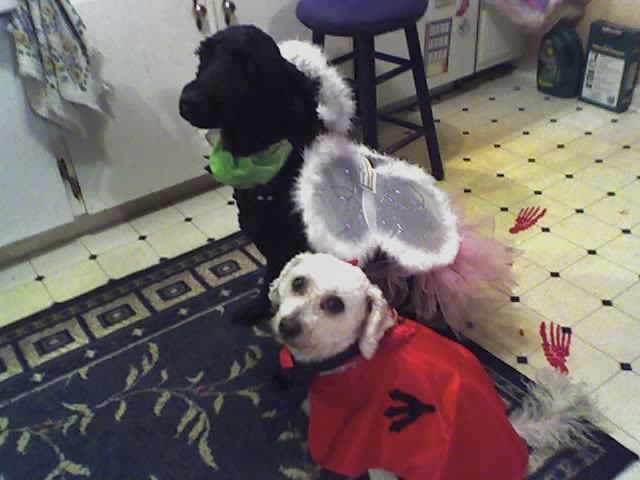 This was about 1 month before Magic died. She really is an angel, now.

AdminPermalink Reply by LM Fowler - Admin on February 15, 2009 at 8:10pm
She was a Princess Angel. You can just about make out the pink tutu skirt she had on. She would walk with me on a leash while the boys went Trick-or-Treating. She absolutely loved the attention she got every year. Cody would ride in the wagon after awhile, he doesn't like walking too much. All the kids had to come and pet them. They were the best costumed doggies every year.

Permalink Reply by theresa wood on March 13, 2009 at 6:35pm
magic was a beautiful poodle. i love the angel picture.

AdminPermalink Reply by LM Fowler - Admin on April 6, 2009 at 6:06am
My Groomer, Mary from Jet Set Pet was here on Saturday and she made a comment that has stuck with me. We were talking about the trials and tribulations of The DRRC and what we went through to get Toodles out of that hell hole in WV. Mary said she can't believe how all this came about just since Magic died! I thought about that all weekend. It's true. My obsession with changing other people's thoughts on dogfood came about after Magic died. Through that, I met Karen and Jacquie. I started Rescued Doodles, first on Doodle World, then on Doodle Kisses and Karen, Jacquie and I started listing Doodles in Need because someone said that there were no doodles in rescue, we started The Doodle Train and grew so much and had some trouble, so we started this! Everything because of Magic! Her hand (paw) is still influencing my every day. What a legacy. Thank You, Magie!

AdminPermalink Reply by LM Fowler - Admin on April 6, 2009 at 4:24pm
OK, now you got me crying. Stop that! Magic's Legacy is going a long way. Thank you for your big heart, too. Love you.