By LAURA B. MARTINEZ, The Brownsville Herald 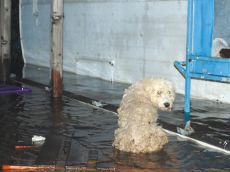 Cameron County authorities say they have decided not to press criminal charges against the owner of 17 dogs that were rescued from flooding in the Green Valley Farms area earlier this week.

The Cameron County Sheriff’s Department said Wednesday the decision was reached after health officials determined the dogs were healthy and had not been malnourished.

“There is nothing criminal to charge (the owners) with,” Chief Deputy Gus Reyna Jr. said.

The “poodle-mix” dogs are expected to be returned to their owner, he added.

Officials rescued the dogs from about 2 feet of water Monday as the officials were going door-to-door evacuating people from the flooded area, said Emergency Management Director Johnny Cavazos. The “poodle-mix” dogs had been left locked in their kennels and were unable to escape the water, he said.

“They were up to their neck in water with no food or (drinking) water,” he said.

Officials estimate the dogs had been left in the water for at least 24 hours, and some were suffering from hypothermia.

“It may have been a puppy mill, but we are not 100 percent sure at this time,” Cavazos said Tuesday.

The canines were taken to the Cameron County Animal Shelter in San Benito for care and as of Wednesday were still there.

Mattingly said he was told that the family had not wanted to leave the dogs behind – that they had to make a decision to evacuate themselves or the dogs and chose themselves because they had no place to take the dogs.

“They (the sheriff’s department) don’t think it rose to the level of an intentional crime,” Mattingly said.

Yvette Salinas, director of the Cameron County Department of Health and Human Services, said Wednesday the dogs remained in the custody of the health department because officials were still gathering information.

One individual contacted health officials claiming to be the owner of the dogs, but officials were trying to verify this, Salinas said.

“We are still at the confirming stage,” she said. “We don’t have everything where I feel comfortable enough (to say) that yes, we are going to release the dogs to one particular person. I am not there yet.”

Brownsville Mayor Pat M. Ahumada Jr. said Brownsville PAWS and other rescue organizations should unite to make sure the owner of the dogs was found and prosecuted.

He also urged residents to contact the district attorney’s office to “log complaints against puppy mills and animal cruelty” and ask District Attorney Armando R. Villalobos to prosecute the case.

The dogs were relinquished and will be available for adoption.

Member Since 2009Permalink Reply by Jeannine, Gamine & Thalie on October 20, 2010 at 11:10pm
GREAT!!! Finally they will have a chance to have a real family and some love in their lives!

AdminPermalink Reply by LM Fowler - Admin on October 21, 2010 at 5:44am
Glad it had a good outcome, even if there seems to be a lot they are not reporting.