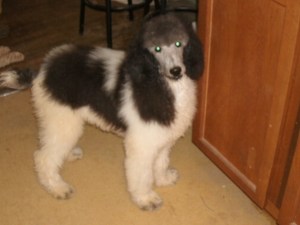 Velvet is a beautiful 3-5 month old Standard Poodle puppy who was dumped at a kill shelter by her breeder in Texas because she has hemeralopia ("dayblindness"); a rare, genetic disorder that causes blindness in young Standard Poodles. There is a study underway at the University of Missouri, Columbia, in an effort to isolate a DNA marker, and therefore hopefully eliminate, this devastating inherited disorder in the Standard Poodle breed. There is a wonderful breeder in Arizona who has been instrumental in identifying and tying to help eliminate this genetic defect - however, ***THERE ARE A FEW BREEDERS KNOWINGLY CONTINUING TO BREED DOGS THAT ARE CARRIERS OF THIS GENE***. So far, most of the affected dogs have been parti-colored; however, there have been some solid colored Standard Poodles identified. If you, or anyone you know, has a Standard Poodle with a previously undiagnosed visual defect, please contact me so that I can put you in touch with experts on this and hopefully help them eradicate this before it continues to permeate this wonderful breed. Most of the dogs that have been identified are coming from the Texas, Oklahoma, and Arizona area. Fortunately, Velvet has a wonderful adopter who is willing to give her a loving, safe home that she both deserves and will be able to function just fine in. Many of these dogs are being euthanized as a result of this handicap - which is a shame on several fronts - if breeders and owners would sterilize carriers of this gene, enroll them in the University of Missouri study, and then place them for adoption, that would be great. There are many, many adopters out there willing to give a blind dog a home. Thanks for any help.
http://www.petfinder.com/petdetail/17339176?mtf=1
Thanks, Elizabeth

Member Since 2009Permalink Reply by Jeannine, Gamine & Thalie on December 5, 2010 at 2:31pm
I just saw that her adoption is PENDING!! Great news. I wish her a good forever home for Christmas.