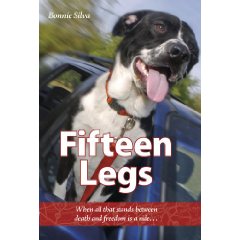 Fifteen Legs: When all that stands between death and freedom is a ride (Hardcover)
by Bonnie Silva

Review
Fifteen Legs chronicles a fascinating, touching and crucial facet of modern animal rescue; one that even many of us in the animal welfare community are unaware of. Silva's book reminded me of the significant difference one person can make, particularly as part of a greater effort. --Traer Scott, author & photographer, Shelter Dogs

The clock is ticking - so come aboard a railroad like no other, and hitch a ride to freedom alongside society's most desperate, unwanted animals --Bill Maher, host of Real Time with Bill Maher

This book warmed my heart. In the midst of our nation's homeless animal crisis, the volunteer rescuers and transporters show us the best that humanity has to offer. --Betty White, actress, author and animal rights activist

Product Description
In Fifteen Legs: When all that stands between death and freedom is a ride... Silva recounts her travels as an uninvited and sometimes suspiciously eye-balled guest aboard an Internet enabled escort service for last-chance animals. Smitten by an inner urge to tell the public at large about the largely undiscovered world she stumbled upon, Silva writes, This notion of volunteers connecting in cyberspace on behalf of desperate, unwanted animals had stolen my heart. The thought of perfect strangers coming together and working as a team to shuttle society's non-human cast-offs out of harms way was too wonderful a story to pass up. I had to tell it. Along the way she encounters the heroines and heroes of the animal rescue and transport world, people like Yahoo groups list owner Brandy Holleran, bunny transport boss Jennifer Barbieri, volunteer pilot Kevin Boyle, hurricane search and rescue leader Jane Garrison, and esteemed transport coordinator Terri Epp, who performs cyber-miracles at home from her computer in Canada. But who ARE these people, and why, after working regular jobs all week, do they willingly give up their weekends to do what they do? As Silva asks, Is this some kind of a clandestine club comprised of people I would never want to take to lunch? Or are they individuals like you and me who, feeling helpless when it comes to big picture problems, will leap at the chance to give an out-of- time animal a lift? Through a whirlwind of voices speaking on behalf of angels wrapped in fur, Fifteen Legs shows us what can happen when a synchronized squad of strangers fuels up and hits the road. With stubborn optimism and a deep compassion for animals, Silva leaves room for everyone who wants to come along for the ride. No prior experience with shelters, pounds, or animal-people required. Facts: Approximately 6 to 8 million healthy dogs, cats and other pets are killed in animal shelters every year. But very often a loving, adoptive home, or a temporary foster home can be found for many of these pets. Sometimes, though, that home is several hundred or even thousands of miles away. That is where the volunteer animal transporters come in - moving animals one leg at a time, usually on a weekend. The planning is done on the Internet, and the transport is done on the Interstate! A transport coordinator (generally working along a specific Interstate corridor) plans the route and schedule for the furry passengers, and then notifies members of that transport group via e-mails. Group members can then volunteer to drive a leg of the route that is convenient for them. Some transports are only several legs long, some are ten to fifteen legs, and occasionally a transport consists of over 30 legs, moving animals all the way from Florida to New Hampshire, or Louisiana to Oregon. Volunteer animal transport is something anyone with a car, a few hours on a weekend, and a desire to make a difference in an animal's life can do. And, as one transporter put it, I do a transport almost every weekend because it is just so good for my soul!

AdminPermalink Reply by LM Fowler - Admin on August 12, 2009 at 4:33pm
I loved this book! It made me laugh and it made me cry. It is about the network of people all over this country who take to the roads every week taking a "leg" of a road trip saving animals from certain death and getting them to a rescue, foster or home and to safety. Everything is conducted over the Internet, where people sign up for a leg or two.

Like our Doodle Train, here on DRC, the goal is to save as many dogs from euthanization as possible. Many people would be surprised to know the underground of people from pilots to truckers to regular people who do this every weekend of the year. They fill one or two legs, hold or soothe a scared dog, cat, rabbit, even pig or bird, while driving to their "meet up" with another person they may or may not know, hand off their charges and go home. No money, no glory, no recognition. I loved this book.