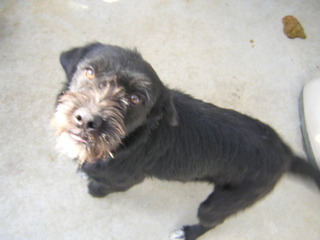 That was Shea's shelter picture. He was in a high kill shelter in KY and those eyes just spoke to me. Toni had Shea (although he was called "Larry" at the shelter) transported to NJ and he fostered with me for a bit and went to stay with Kelly for awhile, too.

I don't know if it was the Big Black Dog syndrome that kept him from being adopted very quickly, but it took a couple months to find Shea's new family. Sad, because he is such a great dog. He has that, whatever-you-want, happy-go-lucky attitude that was just so very special. 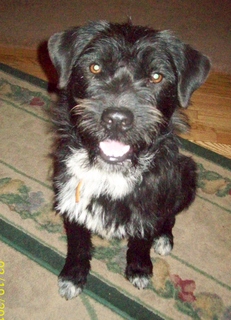 He really became a part of my pack and I will miss him, a lot. Shea now has his own family and doggie brother and human brothers, too.

Have a wonderful life, Shea.

We just took Jack and Shea for a walk.  Shea did really well.  He tried to tug at first, but if I turned around and took him the other way, he followed right along with me.  I think he’s going to get the hang of it fast.

He has already figured out the dog door.  The big remaining unknown is Kit.  When Kit saw Shea, he took off running and is still in hiding.  Both Jack and Shea were in “let’s chase Kit” mode though….so we’ll see how it goes.

We have a tile floor in the kitchen.  Shea just lay on the cool tile as we were cooking dinner, then sat under the table on the screened porch with Jack while we ate.  He already seems to be learning our routine.  You are right… he’s just a “go with the flow” kind of dog.  I’m pretty amazed that he is adjusting so quickly!

I noticed that his initial documents showed an Airedale heritage.  I can see that in him.  No telling what his full heritage is; whatever breeds are in his past, he clearly claimed the best of each.

You would have been so proud of Shea last night!  We had some good friends come over that we make beer with.  They first met Shea on July 4 at our house when they came over to picnic and start a batch of our homemade beer.  When they first met Shea, he was still getting used to the newness of a new home.  He barked quite passionately when they came to the door, jumped up on them and generally created quite a ruckus.  Last night, our friends came back to bottle the batch we had begun.  When their car pulled into our driveway, Jack and Shea walked up to their car, waiting for them to come out with wagging tails and lolling tongues.  Not a bark and not a leap between them!  Our friends could not have been more amazed at the transformation!

You’ll see from the attached label, that we are naming our next batch of beer after Seamus.  (We already have a label for “Slappin’ Jack”.)   I’ve also included a photo of Shea and Jack sitting happily and expectantly together waiting for a pat on the head.  They have the best time playing together.  I was a bit surprised to see that Jack is more the “alpha” of the pair.  Jack will sometimes just stand as Shea crawls under him then turns over and scratches Jack’s belly with his paws.  Jack just stands there and wags his tail.   And Jack has completely stopped the submissive urination behavior that he’s had since we got him.

I don’t doubt that you still miss Shea.  He is, indeed, a very special pup.  No telling what the first year of his life was like, but you clearly made up for it in the month or two he was in your home.  He is amazingly trusting, well-adjusted, and happy!   Thanks for rescuing him… and for finding us! 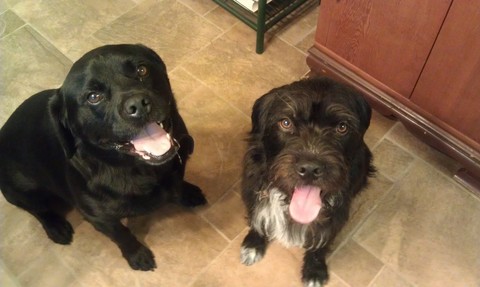 Permalink Reply by Susan D. on July 2, 2011 at 8:30am
How wonderful that Shea has found a good home. Sounds like the perfect match!

AdminPermalink Reply by LM Fowler - Admin on July 2, 2011 at 9:23am
It really is. I am so glad I waited until the very best family came along. He is such a great boy and I now know he will be very happy for the rest of his life.

Congratulations to Shea and his new family! We wish them a long happy life together!!

Here are a few photos from his first day in his new home.  I took him for a short run this morning.  Shea did great.  Shea and Jack have spent today establishing each others’ boundaries.  They’ve been competing a bit for attention, and get along best when they’re alone together!

I gave them both baths this afternoon.  Shea does not like baths!  I had to hold him against me and coo at him the whole time.   We worked for a few minutes on the “sit” command.  I think he’s going to be a quick learner. 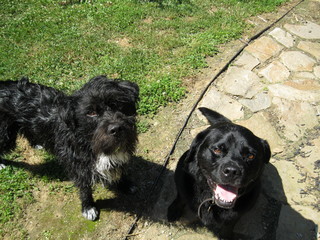 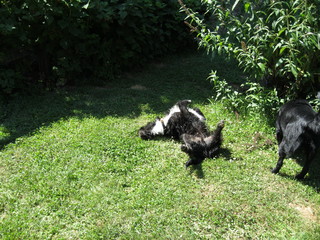 What a great read.  Made my day.  Congrats to all.  The boys look great together.    Joann