In support of Black Dog Rescue.

SINGLE BLACK FEMALE - Seeks male companionship, ethnicity unimportant. I'm a very good girl who LOVES to play. I love long walks in the woods, riding in your pickup truck, hunting, camping and fishing trips, cozy winter nights lying by the fire. Candlelight dinners will have me eating out of your hand. I'll be at the front door when you get home from work, wearing only what nature gave me... Call (404) 875-6420 (404) 875-6420 and ask for Annie, I'll be waiting.....

Over 150 men found themselves talking to the Atlanta Humane Society.

This has to be one of the best singles ads ever printed. It is reported to have been listed in the Atlanta Journal.

Sadly, big black dogs are the last to be adopted and the first to be euthanized in shelters all over this country. Adopt a BBD, today and save a life.


DON'T JUDGE A DOG BY IT'S COLOR Did you know that black dogs are the last to be adopted? Especially if they are large black dogs? Destined for death in many shelters they are passed up for whatever the reason. In our experience, black dogs are the ones that shelters are most often begging rescues to take before they have to be put down for overcrowding. It seems that blondes have more fun even in a dog's world. This is true even in regards to designer dogs. In fact many breeders are trying to avoid breeding black dogs altogether because they don't sell as well as lighter colored dogs.

For many dogs awaiting adoption, the speed with which they find a home may rest not on their breed, gender or age but on one trait that has no bearing on their personality or temperament. The fact that they are black is enough to discourage adopters.

Shelter officials have dubbed it Black Dog Syndrome-- the propensity of dark-coated animals to be passed over for adoption in favor of their lighter counterparts. The first two words of that phrase seem self explanatory: black + dog. A syndrome is defined as "a group of things or events that form a recognizable pattern, especially of something undesirable". To the uninitiated, the idea seems so strange — doggie discrimination?

Skeptics say the syndrome is an urban legend, but shelter and rescue leaders insist the phenomenon is very, very real.The title seems to fit the bill: There are increased "observable occurences" that many (not all) shelters are experiencing in a recognizable way: Dark coated canines are being euthanized more frequently and adopted less.

Based on research many shelters and rescues have come to the conclusion that there are a few reasons for this.....

1) Stigmas Associated With Certain Coat Colors; Folklore; In British folklore, such as stories by Sir Arthur Conan Doyle and Sir Walter Scott, the black dog is a creepy, spectral figure that haunts cemeteries and is an omen of death. (Non-lit geeks who've never heard of those stories have at least seen "Harry Potter and the Prisoner of Azkaban," in which a big black dog called the Grim stalks Harry.) Another Englishman, Winston Churchill, battled serious bouts of depression which he called "the black dog."

Madeline Bernstein, president of the Society for the Prevention of Cruelty to Animals Los Angeles. says: "Light is good and dark is evil. The light-versus-dark thing is so ingrained in our consciousness in books and movies. It transfers subliminally in picking out a dog."

3) Poorly Lit Kennels in Shelters: When prospective adopters do venture to a shelter, black dogs sometimes fade away into the kennel shadows. "They almost become invisible," Madeline Bernstein said.

4) Fear-There is a misperception that black dogs are mean.They are perceived as menacing and there are even those who believe black dogs will bring them bad luck.

5) Black Dogs Can Overheat Faster Than Light Colored Dogs; in the sun with outdoor canine sporting activities and this becomes a "hassle factor" to many potential adopters who don't want to deal with it.

Whitman says the question isn't whether a black dog will get adopted, but how long it will take. The average wait at her shelter is two weeks."Black dogs may linger two months." she says

The lengthened stays create additional problems: Because black dogs are harder to place in homes, shelters often have a glut. "Then you have the problem of people thinking they're ordinary and common, not unusual and interesting," Bernstein said.

Most black dogs have to rely on shelter staff and volunteers to steer potential adoptors their way. And indeed, many shelters take extra steps to make black dogs more adoptable. To combat the problem, savvy shelters keep their black dogs in their best-lighted kennels. A bright bandanna around the neck helps a dark animal stand out, and colorful toys can lessen the fear factor.

Tamara Delaney has taken the plight of Black Dogs one step further. After trying to find a home for a black Lab mix, who languished at a rescue group for three years, Delaney set up a website devoted entirely to BBD’s. Her site, Contrary to Ordinary: The Black Pearls of the Dog World acts as a clearinghouse for shelters and rescue groups by placing pictures and stories of their black dogs on the website.

If you are looking to adopt a Dog, pay special attention to the beautiful black ones waiting to be noticed. Please consider adopting a black dog from a rescue or shelter near you.Give them a chance to find their way into your heart and home.

You will TRULY be saving a life!

Black Pets: In Advance of Halloween, Should you Worry?

You need to be a member of BLACK DOGS IN RESCUE to add comments!

After having a beautiful doodle puppy killed this past week, that I had tagged for rescue, for the only stupid reason of being black, this stigma really has to change. Especially in the South where it is really prevalent.

I Love the top ten reasons Lynne.  I'm glad you posted this.  The shelter I volunteer with will have dogs at a big Halloween event this afternoon.  I am going dressed as ... A BIG BLACK DOG :O)  ... I am going to put together some hand out cards and I'm going to use your top ten reasons!!  I don't know how many BBD's the shelter will be bringing today BUT we need to get the word out that this stigma really does affect doggie adoptions.  Sadly they just get overlooked.  I adore my Big Black HarleyDood.

#6 is very important! After having a light colored dog, I can vouch for that!!

And they are gorgeous, beautiful, fun, caring and the best cuddle doggy in the world!! I LOVE my BLACK Doodle!!!

Admin Comment by LM Fowler - Admin on October 22, 2011 at 8:33am
Top Ten Reasons to Adopt a Black Dog
10. BLACK DOGS ARE EASY TO FIND IN THE SNOW...
9. BLACK DOGS ABSORB HEAT... PERFECT FOR COZYING UP TO ON A COLD WINTER NIGHT.
8. A BLACK DOG CAN MAKE YOU APPEAR THINNER
7. BLACK DOGS EXCEL AT NIGHT TIME GAMES OF HIDE AND SEEK
6. BLACK DOGS NEVER LOOK DIRTY
5. BLACK GOES WITH EVERYTHING SO YOUR BLACK DOG WILL ALWAYS BE COORDINATED WITH ALL OF YOUR OUTFITS.
4. A BLACK DOG ALWAYS LOOKS PRESENTABLE ON ANY FORMAL OCCASION.
3. BLACK IS A COMBINATION OF EVERY COLOR IN THE SPECTRUM, SO YOU WILL ACTUALLY HAVE A DOG WHO IS BLUE, GREEN, RED, ETC.,
2. BLACK DOG HAIR BECOMES INVISIBLE WHEN STUCK TO YOUR GOOD BLACK WOOL COAT.
#1 REASON TO ADOPT A BLACK DOG ... A BLACK DOG IS JUST AS LOVING, LOYAL AND TRUST WORTHY AS A WHITE, BROWN OR YELLOW DOG AND HAVE A MORE DIFFICULT TIME FINDING HOMES!

Admin Comment by LM Fowler - Admin on November 14, 2010 at 6:00pm
I don't think he sees himself as black. Oprah would probably be a good choice especially since she did that puppy mill show awhile back and has a history of being a friend to rescue. Obama got his dog from a breeder (yeah right, a "friend" gave it to them).

Comment by Elizabeth Gunn on November 14, 2010 at 5:17pm
OK, don't anyone accuse me of making racist remarks - my best friend and kennel manager happens to be the most awesome black guy on Plante Earth - but I think that President Obama should sponsor a big "Black Dog Push" while he is still in office, seeing as he has a black dog! Anybody know anybody who knows someone in the White House?

Member Since 2010 Comment by Kary on November 14, 2010 at 5:04pm
Local shelters around here do run specials sometimes like 50% off adoption feed or wave the fee for a second pet when a person adopts 2.

Comment by Elizabeth Gunn on November 13, 2010 at 4:13pm
Gosh, I didn;t know this was here - one of my passions is black dogs, and what we can do to try to get more of them adopted. Smokey, the mini Doodle some of you may have read about last Summer (one of the Arkansas Doodle Project dogs) - was sold at a roadside puppy stand by a broker - the breeder couldn't sell him because he was black. His story can be seen on my Petfinder or Facebook page. He ultimately died....just because he was black! I wish somehow all rescues and shelters could coordinate a big push to adopt out black dogs - "adopt a black dog month" or something - Half-price black dog special, something!

Admin Comment by LM Fowler - Admin on November 13, 2010 at 3:52pm
We feel exactly the same, Kary. Which is one of the reasons why we constantly try to educate people about this. Whether it is unintentional prejudice or a leftover aspect of our distant past, I can't answer that. But the fact is that black dogs are the last to be adopted in shelters all over the world. And it shouldn't be this way. It's our job to show the beauty of a Black Dog. We're their voice. 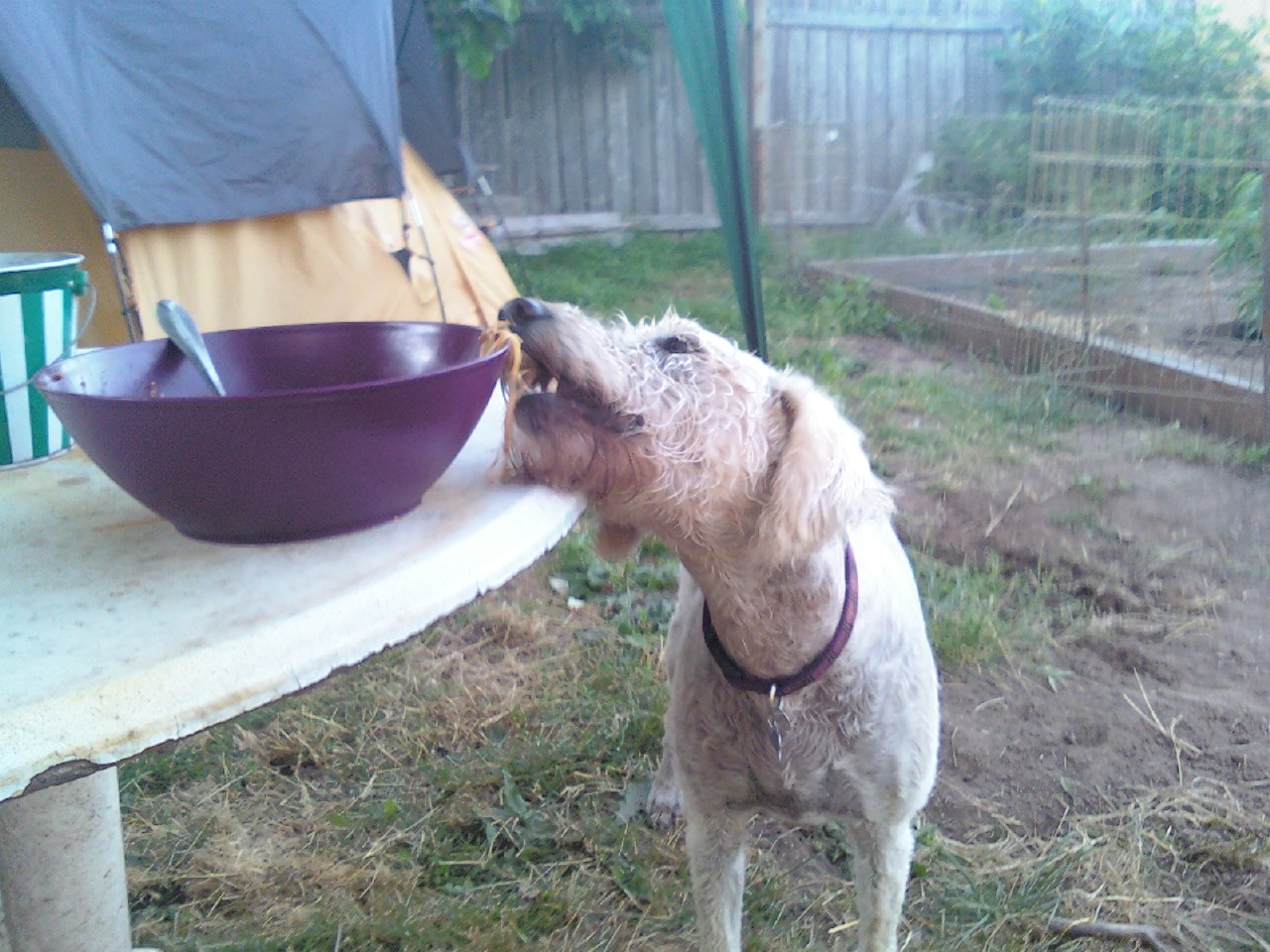