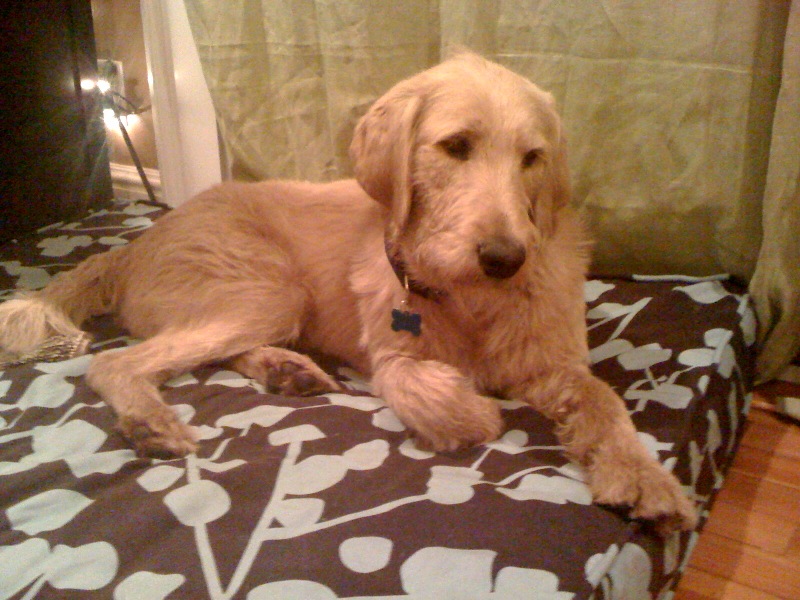 Yeah, yeah, I know. You're looking at that picture and thinking, no, Patty, you nut, that's clearly Floyd. Look, right over there ---->, he's listed as Floyd!

But that's all history; this is Poe.

This pending dog isn't leaving us any time soon. He came to foster, and he stole my heart. And my teddy bear. I'm 43, and I'm not embarrassed to tell you I have my very own teddy bear. Poe steals it at least 5 times a day because he knows it's hilarious. It's the only naughty thing he does!

He's been with us for two weeks as of today. We're trying to broker a peace accord between him and our semi-feral cat. He's on great terms with the friendly boy cat, but he chases poor Feral Girl because he is so desperate to say hello. Since she's currently outnumbered (three dogs in the house is new ground for her), she's making herself scarce, but I'm pretty sure they will work it out. Once we pass the hurdle, he'll be officially part of the pack.

We're also trying to fatten him up. He's clearly acres ahead of Matt, but his hip bones jut out in a way that makes me think unkind thoughts about the people who clearly didn't take care of him for the majority of his 10 months. He's finally realizing that in our house, hands are only used for love. Despite his questionable past, he's got a strong spirit, a great sense of humor and the outlook of a true optimist. He loves romping with the other dogs, he is crazy about our family and he is oh-so-smart.

My younger son saw me uploading this picture to my computer last night. He looked at me and sternly asked "Mom. Why are you uploading pictures of Poe?" I explained I wanted to show him to some of my friends. "Mom. You're not listing him, are you? We're keeping him. We're keeping him, RIGHT?"

He's the sweetest, most loving, most waggliest puppy. We just have to clear the cat hurdle, and he'll be ours!

Member Since 2009 Comment by Patty on March 7, 2010 at 8:13pm
Thanks everyone, and thanks Jodie for sharing your experience with Marco and your kitties.

I was so worried Friday night and Saturday morning. Poe would not stop barking at Oscar, our friendly (and gorgeous!) male cat. I was certain Poe had become comfortable enough in our house to show his true cat aggressive personality. I was so heavy hearted... but I should have known better.

Finally on Saturday I realized Oscar was hurt. He got into a scrape with another cat, and had a small wound on his leg. He was limping and his leg was a little puffy. Off to the vet we went for a round of antibiotics and some booster shots. As soon as we got home... no more barking.

Looks like Poe was simply trying to alert me to Oscar's condition. What a gooooood boooyyyyyy!

Member Since 2009 Comment by Jodie Hart on March 7, 2010 at 4:53pm
He's precious Patty and has the sweetest face! Marco was so desperate to play with our two cats when we first got him and would play chase one the them all of the time. I was so worried he would inadvertently hurt her just because he's so big. After months of scolding him for chasing her he now ignores her completely except when they're both on our bed. Then he likes to sleep with his paw touching her. It's so sweet.

Congratulations on sweet Poe and please keep the picures coming.

Member Since 2009 Comment by Patty on March 5, 2010 at 1:26pm
Liz, did you feel me holding my breath last night? I was walking my father to his car, through the only exit from my house that isn't behind a fence. Dad needs my arm to steady himself, and there we were in the driveway... me with my nearly 80 year old dad on my arm, and Puppy Boy Poe.

Poe walked out the door (we left it open inadvertently), and I stopped breathing. He looked at us, sniffed the air, turned around and trotted right back into the basement.

(And of course I was there for you, Liz! You'd have done the same thing!)

Member Since 2009 Comment by Patty on March 5, 2010 at 11:35am
Krista, I am workin' it with the two of them. The good news is, despite his rough start, Poe is a pretty good listener. I'm able to call him off the cat chase at least half the time. And Daisy is getting bolder. After almost disappearing for the past week, she has slowly been reappearing in the margins. She's done this before and I think I know her well enough to expect her to re-emerge by next weekend.

Poe and Daisy both had rough first years. It's so interesting to me to see the effects on their personalities and ponder nature, nurture and the power of a good mama.

Member Since 2009 Comment by Patty on March 5, 2010 at 9:49am
I'd almost forgotten how fun puppies are. And at 10 months, this boy still has a bit of puppyhood in him! He's been throwing a mushy ball around for himself for the past 10 minutes. Oh, how this dog makes me laugh!