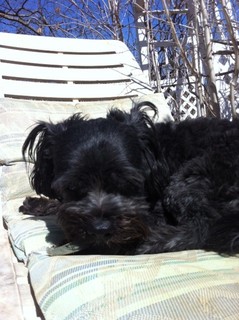 Luke is an adorable 2 year old Schnoodle who lost his home because his owner became ill with cancer and could no longer take care of him. Scared and shy at first, Luke warms up quickly and is a sweet lovable and snuggable boy. He has an obsession with balls and doesn't like to be alone, but will jump on you lap for a belly rub and lay by your feet for hours.

Luke or Lukey, as he is called in his foster home has not had an easy time of it. He lost his home, was sent to a rescue in Maryland, then to another, then transported here to New Jersey. He was adopted, but after ONE day, he was returned because he growled and snapped at the dad who pushed him off the couch when he was sleeping. Luke didn't bite but was abruptly awoken and abruptly returned to the rescue.

Luke is now back at his foster home where he was for two weeks with no incidences of growling or snapping. We would like to find a Forever Home for Luke, where he can be loved for the rest of his life. If you are a dog savvy person and understand that rescued dogs need some time to feel comfortable, know what is expected of him and allowed to be himself for a few days, please consider making this great boy a part of your pack. We want him with other dogs, in a calm household and with a physical fenced yard, as he loves to chase balls.