St. Louis, MO (KSDK) -- A nine-month-old Labrador retriever mix was saved mere moments from death last December after falling through the ice of a frozen pond, the Humane Society of Missouri said. On Thursday, the pooch found herself a new home.

St. Louis police received calls December 16 that a dog had fallen through the ice at O'Fallon Park Lake and immediately contacted the St. Louis Fire Department and Humane Society of Missouri Animal Cruelty Task Force. Members of the fire department crawled out onto the ice and pulled the puppy from the frigid water.

The puppy was rushed to Humane Society of Missouri headquarters on Macklind Avenue for emergency medical treatment. After spending at least 45 minutes in the water, the dog's temperature upon arrival was below 90 degrees. A dog's normal body temperature should be 101.5 degrees.

Within an hour, the puppy was standing and alert. When the Humane Society of Missouri could not make contact with the dog's owner, they named the dog "Flori" in honor of her fire department rescuers. St. Florian is the patron saint of the fire service. 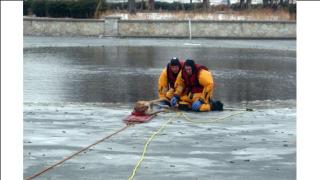 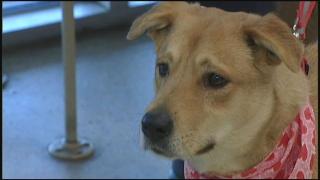 Comment by Joann Gracki on January 15, 2011 at 10:27am
Wonderful story so nice to see the adoption connection, life is great. The people, the dog and the sense of community.