Elizabeth runs Gunn Dogs Rescue in Arkansas and has rescued hundreds of shelter dogs in the past. She has rescued puppy mill dogs, dogs found abandoned on the highway and even dogs someone was selling out of a box in a parking lot.
Elizabeth was promised help by another "Rescue," and agreed to rescue eight doodle pups and a couple other dogs from a back yard breeder and found abandoned in Arkansas. These dogs were sick, some had been eating rat poison and all needed medical attention and socializing. Some didn't survive.
Elizabeth has done a wonderful job and found homes for most of them. But because she was promised help and that help didn't come, Elizabeth now finds herself struggling to make ends meet. One of the dogs, Grant needs to have surgery tomorrow. Here's the story in Elizabeth's words: 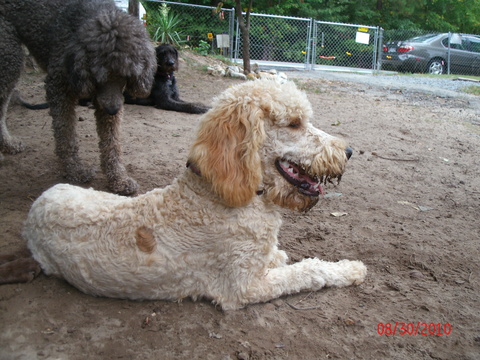 Grant had been hit by a car on the highway where I picked him up. And we don't know about the rat poison - someone whose yard he wandered up into, I imagine. Poor thing has really had a rough time of it. Almost all of the original 13 or so Doodles I got in that week have been adopted - I still have one of the Mad Scientist puppies - Nash - who is growing like a weed! And Grant is still here, of course, along with his mother Sophie, the Standard Poodle. We think she is his mother, anyway - they were wandering together, along with a third Doodle pup that we never recovered. Rumor about town is that they belonged to a local backyard breeder, but he denied it when the Sheriff questioned him. Small towns in Arkansas can be rough for dogs. A witness saw Sophie and Grant (we assume it was Grant) get hit by cars after they were literally dumped in the middle of a four-lane highway - we are assuming that the third Doodle pup was killed, but we never located his body. It was horrible. One redneck (excuse me, I can't help it) - even admitted to shooting at them to get them out of his yard. No one fed them or gave them any water, and it was late July with temperatures in the 100's. The guy, we think who dumped them, is the ex-husband of the woman the Mad Scientist pups came from. Two of them had died before I got them. I need to take a road trip back to that area and make sure there aren't more Doodles wandering around down there.
A lot of people tried to help with donations, but, as you know, most of the money was - ah - "diverted" by another rescue and never made it to the Arkansas Doodles. But what goes around comes around, you know? I still owe a huge vet bill, but my wonderful friends at the vet are very understanding and trying to help raise donations to put towards the bill. I am blessed to have so many awesome friends out there!
Here's some of the original story for those of you who didn't follow it:Eight 10-week-old labradoodle puppies were taken in by Elizabeth Gunn of Gunn Dogs Rescue in Arkansas. There were 3 chocolate girls and 5 boys, chocolate and black.These babies were severely malnourished, flea and worm infested, had various skin conditions, eye and ear infections, diarrhea, and giardia. They had never seen a vet.These puppies were starving, dehydrated and lethargic when they arrived. Initial vetting indicated that they are Parvo free but they need to be closely monitored for symptoms over the first few weeks and fecal tests had to be repeated with or without presentation of symptoms. They all required sub-cutaneous fluids and they were treated for all the various infections along with the worms and giardia. Elizabeth also provided them with electrolyte supplements and high calorie puppy food.
11/3 Update on Grant -
I am terribly worried about Grant - he is continuing to vomit a lot, and has lost what little weight he has gained. I am afraid I may feel a mass now in his abdomen, so he will be seeing the vet on Monday. Please send prayers to Grant - he has had such a rough time. If anyone would like to help out with his vet bills, you can call my vet directly - Park Hill Pet Hospital - 501-758-7387. They know me well there - oh, too well - LOL! My bill with them each month probably pays their rent, and I have gotten behind - argh! I am so embarrassed that I was not able to pay my bill after over $2000.00 was taken from the Arkansas Doodle Project by "that other rescue", that I have avoided taking Grant to the vet because of it. Anyway, after the fiasco with the misappropriated donations, I am loathe to even ask - so thought maybe if people knew they could send a donation directly to my vet, that might help assure everyone that the Arkansas Doodles will actually get the donations this time!Anyway, paws crossed that Grant will be ok...I gave him some Zantac earlier tonight before his dinner, and so far no vomiting - but he seems to do it in the night mostly. I have tried everything I can think of and am out of ideas on what might be wrong, and now with feeling the mass I'm really worried. If anyone has any questions or suggestions, please feel free to contact me. My home number is 501-888-8516, my email address is gunndogs@yahoo.com (also my Paypal account address). Thanks for all the kind words of welcome from everyone! 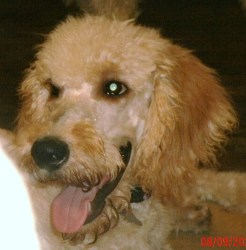 http://www.petfinder.com/petdetail/16977351
11/8 Update on Grant -
Grant is at the vet's - he does have a very large mass in his abdomen - it doesn't look good at all. They are going to to exploratory surgery either this afternoon or tomorrow. I am cashing in my IRA to pay for his surgery. I feel so bad that I waited at all to take him to the vet - but once I found the mass, I got him right in. I have a terrible feeling about this, and have been crying all morning. Sometimes rescue is so heartbreaking. Please continue to send prayers for Grant and while you're at it, ask God to please help me get through this. My heart is breaking.
If anyone would like to help out with Grant's vet bills, you can call his vet directly - Park Hill Pet Hospital - 501-758-7387.
To pay by Credit Card by Paypal the email is gunndogs@yahoo.com
Any amount will be appreciated.
Sadly, Grant did not survive the surgery. A very large mass was found inside his abdomen that would have caused terrible pain and suffering. Our collective hearts go out to our friend, Elizabeth.
REST IN PEACE AT THE RAINBOW BRIDGE, GRANT.
LINK to original discussion

Permalink Reply by 0dr2tzpi1qn7n on November 12, 2010 at 11:22pm
Even though Amanda and I only met Grant's cute butt once. He was a great dog, had a wonderful demeanor and presence about himself. Walter knew him much better than us, and really expressed how great pack mate Grant was during their time together. He will be missed only a short time as we all get to see them again some day..

Permalink Reply by Elizabeth Gunn on November 13, 2010 at 12:41am
Damon, Amanda, Jinx, and Walter (formerly Skip on my listings) - welcome, and I hope you enjoy perusing this site. And of course, send photos, photos, photos - of all of you! Thank you for the kind words about Grant - he was a gem, and I'm glad you, Amanda, and Jinx got to meet him during your adoption of Walter.

Member Since 2009Permalink Reply by Jeannine, Gamine & Thalie on November 13, 2010 at 9:18am
Eliz,
I'm so so sorry for your lost, can I say our lost too.
I was so much hoping for a miracle here. Now I,m crying the lost of beautiful sweet doodle and blame that other rescue for it.
You did the best for him and that we will all remember. Grant will have somebody to wait for at the other side of the Rainbow Bridge and he will not be alone.
My heart, prayers and thoughts are with you. I told you before and will repeat it again, you are an angel for all those poor suffering but so wonderful babies.
We love you very much.