COSMIC or COMIC KARMA - Either way, What goes around...comes around
This was sent to me by a friend (Thank you, D) to remind me to rise above the crap that is said about us and be true to ourselves in the face of jealousy. My true friends and inner circle will recognize the irony in this story, everyone else should know that karma is real. If you find any other Karmic stories, add them for all of us. Lynne 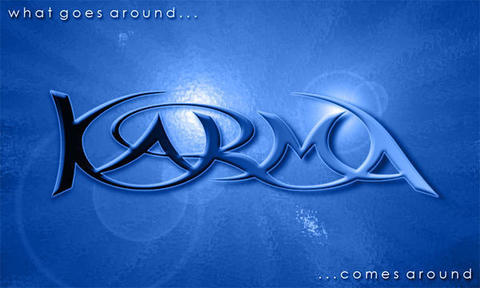 October 22, 2010 at 12:31pm
Subject: Get this for Karma - and it includes DOGS!!
I thought you would get a kick out of this one, talk about Karma at its finest. My best friend breeds and shows shelties and she has for YEARS. Takes excellent care of her dogs, house, etc. Like any dog lover she had quite a few of them - around 12-15 including puppies. She has lived in her house for about 12 years now, nice little quiet neighborhood. So about 3 years ago a doctor and his wife moved in nextdoor - you can plain as day see her fenced in dog area behind her house - she has dividers to keep certain dogs away from eachother and she only let them out to enjoy the outdoors they weren't kept out there all day and night. They did bark but never excessivly and if she told them to quiet they would. No one ever complained UNTIL THE DOCTOR.

He went after her as dirty and as mean as he could. He called the police on her over and over and over said she was violating the noise ordinance. He called the health department and said it was a sanitary issue, he called CHILDREN'S SERVICES and said her children were living in unfit conditions with all of the dogs - they came out and had to investigate her by law and they had to contact her kid's school and advise them - she was sooooo upset. Finally they went to the Prosecutors office and sued her - this was just at the beginning of them summer. The court tried to get her to take some sort of an offer to plead guilty and she refused. She said she wanted a jury trial - she tons of proof he was flat out lying. Once she told the court that the court threw the case out and told the doctor if he ever planned on calling the police or any other official he has to have 100% undisputable proof. Yeah for her but emotionally it was absolutely awful for her and her family.

Here is the best part - both of their backyards butt upagainst the Portage Lakes State Park - in August they cleared ALL the land in the area behind their backyards - there is still a chain link fence that seperates but its cleared to the fence. They are putting in a 5 ACRE DOG PARK!! Can you believe it? Talk about getting revenge on an entire dog park in his backyard!! It got even better! Nextdoor to his doctor's office a VET just opened and is going to offer boarding and training with an outdoor area that is right next to his parking lot!! Talk about what comes around goes around!!

I hope everything works out and Karma comes back as much as it did here!! GOOD LUCK!!!!!

AdminPermalink Reply by LM Fowler - Admin on October 22, 2010 at 4:12pm
Isn't this a great story? It couldn't have come at a better time.

AdminPermalink Reply by LM Fowler - Admin on October 23, 2010 at 10:48am
Last Christmas Eve I was invited by one of my students to have dinner at a Japanese Restuarant. On the way to that diner, we saw a begger by the side of the pavement. I usually don't give anything to those beggers who just stand there without doing anything, but to those who actually sing, or play any kind of musical instrument, because at lease they are making some sort of efforts to earn the offerings. However, since that was the Christmas Eve, and according to the Christmas spirit, I thought we should offer something to the poor, so I, without any hesitation, gave that beggar five dollars. My student was laughing at me and teasing me, saying that I should give her the money. I smiled and shaked my head.

After the dinner, I said maybe we should ask for a lottery ticket to try our luck! My student paid for the dinner and she insisted that we shouldn't. Despite her rejection, I asked the waitress to give me a ticket when my student was using the bathroom.

When the waitress came with it, I scratched the 'lottery' part with a fork and I was stunned to find I actually hit the 'jackpot'. Guess how much I won?

Fifty! Fifty Dollars! My student sighed: "Now I know why people call you a lucky dog!"

I gave five bucks for the beggar and now I got 50 in return.


I had a friend who told me a similar story. One day she helped a blind man to cross the street early in the morning, and in the afternoon she bought a lottery ticket and hit the Jackpot. She won $100 on that day.

Is that Karmar? I think that is what we often say one good turn deserves another.

AdminPermalink Reply by LM Fowler - Admin on October 23, 2010 at 10:50am
I run late. Always. No exceptions. When I'm NOT late, it's usually an accident. So, I have to have a few excuses handy often.

Once, I came late to a training, and, since I bike everywhere, I offered that it was because I got a flat and had to change a tube on my wheel.

Training was long and exhausting, I could barely pedal back home. Halfway through I hear "shhhhhhhhhhh" - and there it goes. A flat. I had to change a tube on my wheel. Served me right.

AdminPermalink Reply by LM Fowler - Admin on October 23, 2010 at 10:58am
A woman working at a local store helped an old man with his groceries everytime he came. When the old man died he left a couple million for the woman.

Thank you for making my life a living hell
You've screwed me over and you've done it well
You've taken all I have to give to you
Laughed behind my back, played me for the fool
It doesn't matter anyway
You did the damage and went on your way
Laughing at the tears I cry
And all I can do is wonder why
You only built me up to watch me fall
Knocked me down to watch me crawl
For you, it was nothing but fun
And now that it's all said and done
The only one hurting is me.
But let me remind you one thing
You can laugh now as you watch me drown
But what goes around, my friend, comes around.

AdminPermalink Reply by LM Fowler - Admin on October 23, 2010 at 11:09am
You will know them by their fruits. Are grapes gathered from thorns, or figs from thistles? So, every sound tree bears good fruit, but the bad tree bears evil fruit. A sound tree cannot bear evil fruit, nor can a bad tree bear good fruit. Every tree that does not bear good fruit is cut down and thrown into the fire. Thus you will know them by their fruits.

Though little in common they do seem to share
The pauper a much better person than the fraudulent billionaire.

This poem was written/submitted by Francis Duggan. 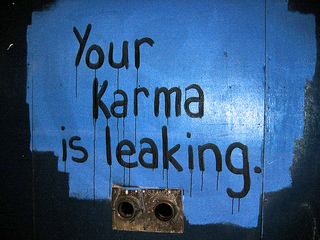 How people treat you is their karma;
How you react is yours. ~ Wayne Dyer

AdminPermalink Reply by LM Fowler - Admin on October 23, 2010 at 11:35am
As she has planted, so does she harvest; such is the field of karma. ~Sri Guru Granth Sahib


Men are not punished for their sins, but by them. ~Elbert Hubbard


There are the waves and there is the wind, seen and unseen forces. Everyone has these same elements in their lives, the seen and unseen, karma and free will. ~Kuan Yin


Whatever we do lays a seed in our deepest consciousness, and one day that seed will grow. ~Sakyong Mipham


Like gravity, karma is so basic we often don't even notice it. ~Sakyong Mipham


Before you begin on the journey of revenge, dig two graves. ~Proverb