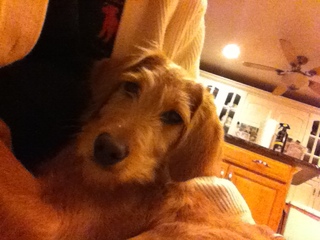 Flynn is a 3 month old, first gen. Labradoodle boy from a BYB (puppy mill) in PA. This sweet boy was adopted by his "breeder" to a family in New Jersey. He was returned to the "breeder" because he wasn't holding down his food and their vet said it would be an expensive surgery to fix an esophagus problem.

Flynn has only been with me for a few hours but in that time, he met my pack, played with some puppy chew toys that I found around the house and has eaten my homecooking several times and has had no problems. I started by giving him a few bites here and there and he held it down and came back for more. Just plain chicken, smashed peas and brown rice.

I went looking at the papers that came with him and the family was feeding Purina Puppy Chow. Could this be the problem? We will see. I have an appointment for Monday and some housetraining to do, then Flynn will be looking for his new Forever Family. 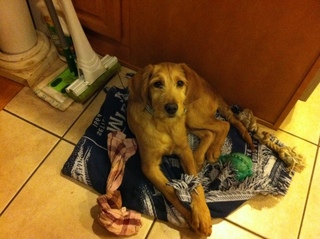 http://www.youtube.com/watch?v=j0kxLG-niC8 - ENJOY!
Posted November 27, 2010
My vet examined Flynn and looked at the vet tests that came with him and said that he does not present as a megasophagus dog. Both tests said "no blockage seen" and "Inconclusive." The vet thinks it might be an immature digestive system.
Over the month Flynn was with me, I eliminated corn from his diet, fed him a Premium Kibble softened in warm water, boiled chicken, brown rice, smashed peas, yogurt, pumpkin, crasins, ground turkey, fish oil and a holistic supplement for digestive upsets. In the first week he was here, he regurgitated three times (never threw up food). Once he was on a more wholesome diet, he had no more issues.
I began looking for just the right home and family for Flynn.

After going through the 20+ applications I received on Flynn, I found the most perfect family. They have another Labradoodle, a 13 year old Human Brother and a mom who is a nurse. She loves that I had started him on a holistic diet and plans on continuing it. The Dad is head over heels in love, as is the entire family.

Karen has reported that Flynn has not had one single incidence of regurgitation and already loves him so much. They feel like they won the lottery.

Have a great life, Flynn. We look forward to your updates in your happy family.

Permalink Reply by Susan D. on January 1, 2011 at 10:18am
I am so happy for Flynn and his new family! What a way to start the new year! This sweet boy will have a wonderful life!

AdminPermalink Reply by LM Fowler - Admin on January 1, 2011 at 10:23am
His new family was gushing last night about how wonderful he is. I couldn't have found a better family for one of my dogs. They had a great app, wonderful references and a beautiful home. He will live his life, loved and happy. What more could I ask for? I will miss him, though.

Griff is wonderful!!!!! He's a little shy when we go for a walk and gets frightened by the wind, garbage bags, loud noises, etc. I think its just cuz he hasnt been out much. His hair is getting longer and he's getting very frisky as he grows and gets taller. He's now advanced to puppy canned food with his dry (both blue buffalo). I just asked M to help me get pictures to you. For me, this is a big deal but I need to learn more about this darn computer anyway. Well, gotta run and make dinner. We so love this puppy! When he hears his dad's truck, he goes running to the back door to wait for him--I know I'm partial but I think he's REALLY smart. He can already give you his paw + sit. I'm leash training him but as I said he's a little fearful, so we're going slow. Thank you so much for everything.