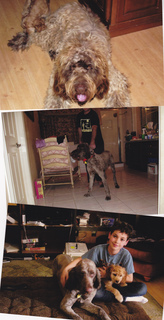 The most we know about Beau comes from the date we found him: 2/11/11.  He was on the street, skinny, furry (golden curly ), dirty, hungry and matted.  We tried to find a owner, but were unsuccessful. We took him in and bathed him right away and began trying to put some weight on him.  He has gained approximately 20 pounds in the past 3-3 1/2 months since being with us.

We took him to the vet right away and started his puppy shots. The vet estimated his age at about 9-10 months. He has beautiful shiny teeth and eyes.  He is him microchipped and shaved down because of how severely he was matted.

Beau is neutered, HW- and UTD on shots.  He has been eating Nutro holistic food- there top of the line food.   He is house-trained, has learned his name, to come, to sit, to stay, and to "shake" (the boys taught him this one).  He is kind and gentle.  We have three young boys and he is gentle when playing. He also plays with our two cocker spaniels, one who is just a puppy and Beau plays without hurting her.

He loves to run and be outside, if you are with him. He wants to be near the family- he doesn't like to be left alone.  He does bark when he is left outside without you or the other dogs for company.

He is all love-  and he deserves all the love and attention in the world- he also needs someone with energy to keep up with his activity level!

An active family with time and love to give Beau would be wonderful. He is an active dog and needs his own yard and family. If you think you can give Beau what he needs and would like to be considered, please fill out an application and it will be forwarded to the family.