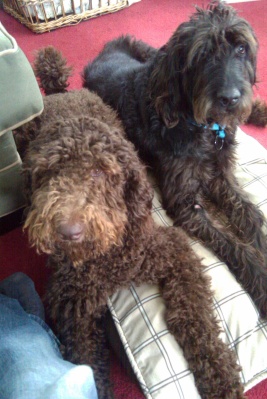 With a heavy heart I am writing to inform you all that our sweet Dublin who was being fostered by Adrianne Matzkin's daughter Marissa Tait in Pittsburgh was killed this evening.
Marissa's husband Seamus had Dublin and their doodle Mickey out for their evening walk when both Seamus and Dublin were struck by a speeding hit and run driver 1 block away from their home. The driver was apparently going so fast that he skid and hit the curb propelling the car onto the snow covered sidewalk striking Dublin killing him almost instantly and then striking Seamus so hard that it knocked him out of his boots. The cars front tire actually ran over Seamus' foot and leg injuring both. Luckily The Tait's dog Mickey was behind Seamus at the time of impact and was not injured. Terrified, Mickey ran all the way back to the house.
The driver did not stop........
Thank goodness the snow was deep enough to cushion the force of the cars tires as they ran over Seamus' leg or his injuries would have been far worse. The snow was not deep enough to spare poor Dublin. He was closest to the oncoming car and was struck first.
He tried to get up for an instant and then collapsed. By the time Seamus got to him he was gone. Crying, in shock and dragging his own injured leg, Seamus picked up Dublin and carried the 70 Lb. dog back to the house to a hysterical Marissa who was on the phone with me shortly after and inconsolable. I only wish that I could have been there with them as they were experiencing this terrible tragedy. I felt completely helpless and could only offer a calming voice on the other end of the phone as comfort.
Another driver who witnessed the event had already called the police and then proceeded to try and chase the hit and run driver. The driver has not been found.The police arrived minutes later along with an ambulance.
Seamus so pumped up on adrenalin refused treatment and opted instead to help the police try to find the driver. Marissa and her father-in-law wrapped Dublin in a blanket as Mickey who had been trying to rouse him, sat by sullenly watching. Though they knew that he was gone, together they took Dublin to the emergency vet. The vet confirmed that Dublin had been killed by blunt force trauma to the head and that thankfully he had not suffered.
I am personally so devastated by the loss of this poor dog who never seemed to be able to catch a break in life that I am finding it difficult to type this post.......I cannot imagine what this young couple who with Dublin in their charge were first time foster parents are going through emotionally in the aftermath of this evenings events. They drove 5 plus hours in total to rescue him from a neglectful situation in Ohio. They bravely brought him into their home flea bitten, stinky, sick and scared and immediately showered him with care, human kindness and unconditional love. I do know that they are utterly grief stricken, completely devastated and feel personally responsible for Dublin's death.
I am asking you all to please reach out to Marissa and her husband Seamus and let them know that we are grateful to them for taking such good care of Dublin and for giving him a second chance for a happy life. Now more than ever they need the support of our rescue family and most importantly they need to know that this tragedy was not their fault.
No matter where we are all located throughout the country, we all came to know and love  Dublin. We are all grateful for this sweet, gentle soul and that he finally had a chance to experience  the care that he had been deprived of for most of his life. Even if it were only for a short while, his last days were joyful carefree and filled with love. He was a happy dog in spite of his past and all of the medical tests and vet visits he was subjected to as we tried to save his sight. Thank you for following his story and for all of your help and support.
.......and thank you for any words and expressions of sympathy appreciation and kindness you can offer this young couple through this terrible time.
With great appreciation,
Jacquie

Member Since 2009Permalink Reply by Patty on February 14, 2010 at 9:34am
Marissa and Seamus, you are heroes. I am so very sorry for your pain. Mickey's too. Thank you for making Dublin's last days joyful.

Permalink Reply by Suzanne Matzkin on February 14, 2010 at 11:56am
When I got the call last night I cried like a baby!! Dublin was such a good boy and marissa and seamus really loved him! keep sending your love because they are devastated

Member Since 2009Permalink Reply by Tonya Hopkins on February 14, 2010 at 2:44pm
I am struggling to find any words......My heart goes out to you Marissa and Seamus!!! I loved Dublin without knowing him. Please find comfort in knowing Dublin found true Love from you and all the DRC members!! What a special guy...He found his way into all of our hearts forever :)

Member Since 2009Permalink Reply by Jeannine, Gamine & Thalie on February 14, 2010 at 5:24pm
Marissa and Seamus I'm so so sorry for your lost. So sorry for the death of poor Dublin and the pain that Mickey experienced. Dublin had a few days/weeks of true heaven because of you. My deepest sympathy to you all.

Member Since 2009Permalink Reply by Jodie Hart on February 14, 2010 at 9:51pm
Marissa and Seamus, you are both such precious, special people for fostering Dublin and what happened was beyond your control. It's because of unselfish people like you that I have my Marco and my heart will always swell with love for all of the foster's out there who love and give such generously of their time to these sweet, scared, needy dogs and make them feel safe and loved until they are placed in their forever home.

Blessings to you both!

Member Since 2010Permalink Reply by Julia Deardorff on February 15, 2010 at 9:48am
How can words ever say what the heart feels? I didn't know any of you, but have seen the pictures posted of Dublin. I am crying now for the loss of a precious dog and for the anguish the foster parents feel. To know so much love for the past few weeks was the reason these people were to be his fosters. Isn't it wonderful to know that they gave him that. He might have died alone and abused, instead he had known a wonderful home, a brother & happiness and now, many people to morn for him. Fosters are angels!

AdminPermalink Reply by LM Fowler - Admin on February 15, 2010 at 10:04am
Our hearts are heavy over Dublin but we are so grateful Marissa and Seamus are safe. We send big hugs across the miles to you.

Member Since 2009Permalink Reply by Kevin on February 15, 2010 at 10:56am
To Adrianne, Marrissa, Seamus, Suzzane and all of their family and friends... I saw a quick post on Facebook about this and had no idea that Seamus was hurt also. I thought he had a car accident with the dogs in the car... I had no idea that it went down this way....

While I feel for Dublin, my heart goes out the the entire family.

Member Since 2009Permalink Reply by Shirley Wirebach on February 15, 2010 at 4:43pm
Seamus and Marissa, may the memories of the wonderful life you gave to Dublin for such a short time comfort you in your sadness.

Permalink Reply by Meggan Moneypenny on February 16, 2010 at 9:33pm
Dublin I will miss you forever. You will always be my fuzzy puppy. I'm so sorry buddy.

Member Since 2009Permalink Reply by gene king on February 17, 2010 at 4:16am
I am heavy hearted over all of this. I couldn't even reply until now. This is every foster parent's nightmare. Thank you Marissa and Seamus for caring for Dublin. I am so sorry for your loss. I will never understand how people can be so cruel and uncaring to knowingly injure someone and not stop. I hope he gets what's coming to him, one way or another.

Permalink Reply by Meggan Moneypenny on February 18, 2010 at 9:48am
Thanks for sending me that pic. He loved sitting in chairs like a human. Ig there was one by a window, look out he never wanted to leave it.